This collection of poetry and stories erases the borders between the real and the fantastic.

You are allowed to use our press photos and example content from the book in social media,
on your blog, website etc. and in printed publications.

Evanescere - magic with the moose 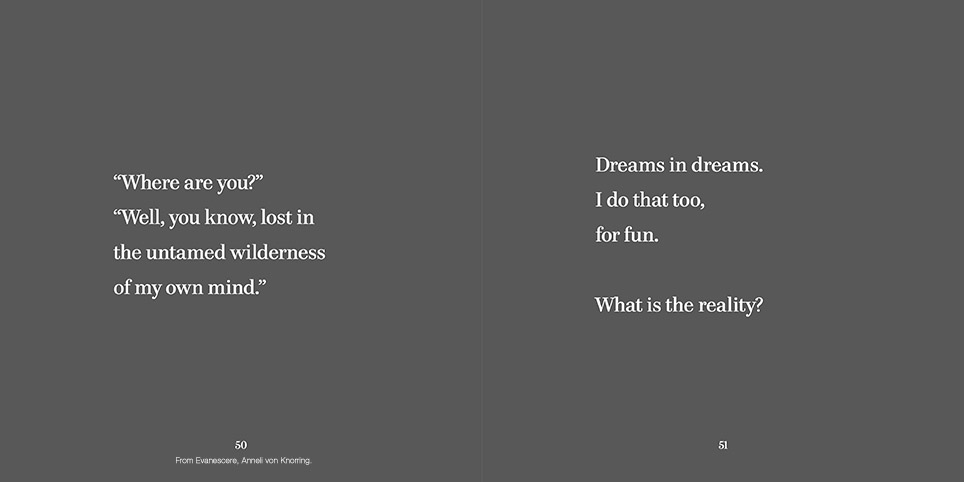 I’m so glad that you are here. What will you find reading this book? If you listen to Nikolaus’ and my music, you’re probably used to the nature magic and the existential lyrics. This book contains even more of that, along with stories to take you into a world of possibilities and fantasy. Evanescere means ‘to vanish’ and there are many layers to remove before we can truly know ourselves.

I mention light-working – but what is this? In short, it’s the work of dealing with emotions instead of repressing them. It is the spiritual journey of liberating oneself.

From music to a book? What happened? I love to write. Sometimes the words become songs, sometimes prose and poetry. The words bring clarity. The words are healing. It’s how I know myself. How the chaos unfolds to make sense. It’s how I hear my soul and everything beyond. It’s all about healing and becoming all that I am.

Art has another language and reaches the soul differently to how words do. The mind doesn’t have to interpret in between. It’s like music in a way, but visual. I’ve painted just as I’ve written. I let go. In that moment I am one with existence.

My words and paintings are not just for me, they are for you. That is why I chose to set them free. I can’t know what you will find, but there are messages, realisations and wonders hidden in here – just for you.

One last thing. I’ve chosen to write most of the words from the first person perspective. This way every story or poem can be yours.

With all my love,
Anneli

"Oh yes I did, and it is beautiful. Perfect to listen to and read during ’Me-Time'."

"You heal me and inspire me every time I listen to your album. I’m listening every time I drive. Before Christmas I listened for four hours non-stop. What you’ve done is magical. Love it. Your voices together. The music. There’s so much power and so many dimensions. Thank you for doing this."

"Thanks for your wonderful songs and lyrics."

Transcendent fantasy author Anneli von Knorring here presents a breathtaking channelled collection of tales and poetry that may provoke, enchant or intrigue readers. Let the walls of reality crumble to see where it will take you.

About Evanescere Anneli says: "I love stories. It’s a relaxed way of saying something important."

Anneli made her debut as an author in 2016 with Sagan on Trollsjön. Since then she's been pondering how to make her writing a part of what Enchanted Duo does. Evanescere is a first attempt at combining the world of stories with the world of music.

On the included meditative theme album Enchanted Duo 🇸🇪, a New Age and Fantasy infused band 🎸, brings life and music to the words from Evanescere.

Formed in 2007 Enchanted Duo consists of:

Anneli von Knorring, author, composer, singer, producer and engineer, was one of the first foreigners to sing on a Malayalam movie soundtrack.

Nikolaus von Knorring, composer, singer, guitarist, producer and engineer, with his roots in metal, played and sang from early age in the band Poseidon.

And yes, they are married.

Evanescere, self-released 2020, is the latest release from Enchanted Duo and takes the lyrics to a whole new level.

In 2017 they self-released their second full-length album Explorers, where they blend rock and electronic music. Including the popular ”Come petrichor”, exploring values and how they change as we grow.